A family of Linux Trojans. One of its representatives is described below.

The Trojan’s configuration looks as follows:

All samples of the Trojan use a function that hides the following strings:

Once launched, the Trojan removes its executable file from the disk, blocks the SIGINT signal with the help of sigprocmask, and sets the parameter SIG_IGN for SIGCHLD and a handler for SIGTRAP.

Then the Trojan tries to open the /dev/watchdog file for reading/writing (/dev/misc/watchdog is also checked) and, if successful, disables the watchdog timer.

The Trojan subsequently opens a root folder and sends a request to the address 8.8.8.8:53 to get the IP address of its network traffic.

Next, the Trojan calculates a function taken from the argv[0] value:

This function returns a number from 0 to 8 that represents an index in a function array:

If argv[0] == “./dvrHelper”, a parental process receives the SIGTRAP signal (for which a handler was previously installed). The handler, in turn, modifies the IP address taken from the configuration and the C&C server’s port to which the Trojan will connect.

Then a listening socket is opened at the address 127.0.0.1:48101. If this port is busy with another process, the Trojan runs a function that finds the process and kills it.

The Trojan subsequently generates a name that looks like a random sequence containing the characters [a-z 0-9] and writes it to argv[0]. Using the prctl function, the process’s name is changed to a random one.

The picture below shows a code fragment for Linux.DDoS.87 (left column) and Linux.Mirai (right column). 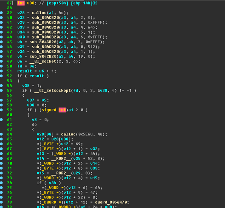 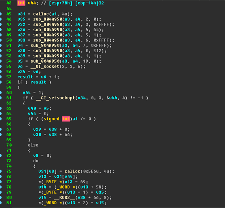