It is a multi-module backdoor written in C/C++ and Assembler and designed to run on 32-bit and 64-bit Microsoft Windows operating systems. It is used in targeted attacks on information systems for gaining unauthorized access to data and transferring it to C&C servers. Its key feature is utilizing plug-ins that contain the main backdoor’s functionality. It is a malicious DLL whose original name — hpqhvsei.dll — is found in the export table. Like BackDoor.ShadowPad.1, this modification has a lot in common with the malware samples of the BackDoor.PlugX family.

Export functions are absent. The timestamp from the export table is identical to that from the PE header.

The first execution steps generally correspond to the BackDoor.ShadowPad.1:

The exception is that there is no exhaustive search through the handles to find objects whose names contain TosBtKbd.exe.

The string encryption algorithm is almost identical, but the constants differ:

The algorithm for loading additional modules is also similar to BackDoor.ShadowPad.1; however, there are new modules in this sample. The backdoor has 16 modules in total. A list of their names with codes and timestamps is provided in the following table:

For each loadable module a structure is formed that is added to the list that modules can use to call each other's functions. To work with this list and for other auxiliary tasks, the Root module exports the function table. 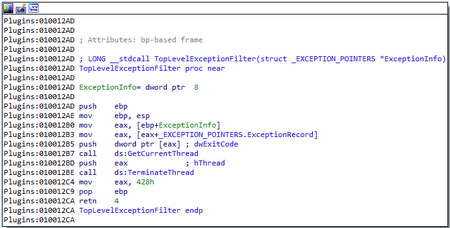 The key difference between the functions in this case is that PlugX operates on an object containing a linked list of all running threads, while ShadowPad directly terminates the current thread. However, in general, there is an analogue with the ShadowPad object, which stores loaded modules as a list.

The main payload execution starts with the Install module. Similar to BackDoor.ShadowPad.1, at the beginning of this stage, the backdoor obtains the necessary privileges. It is worth noting that the first stages of operation are similar to those of the PlugX backdoors we studied earlier. The illustrations below show a comparison between the BackDoor.ShadowPad.3 and BackDoor.PlugX.38 algorithms. 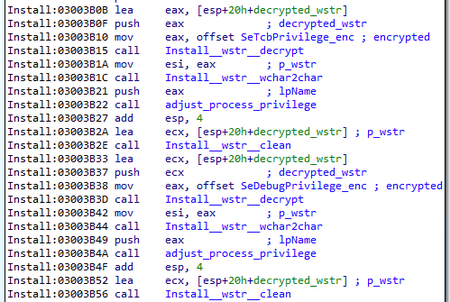 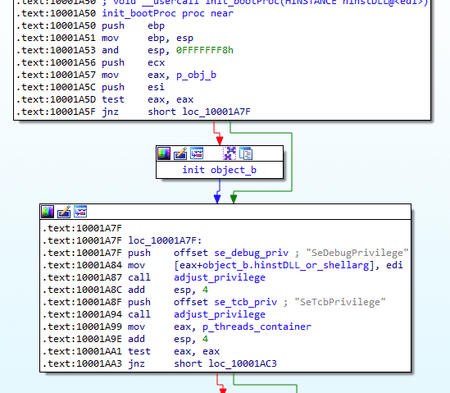 Then the malware initializes the configuration using the Config module. There is also a similarity with BackDoor.PlugX at this stage. At the beginning, the backdoor checks the first four bytes of the buffer where the encrypted configuration should be stored. If the bytes are 0x58585858 (XXXX" in ASCII), then:

In BackDoor.PlugX, the first 8 bytes are checked for equality with the string XXXXXXXX.

The illustrations below show a comparison between the BackDoor.ShadowPad.3 and BackDoor.PlugX.28 algorithms. 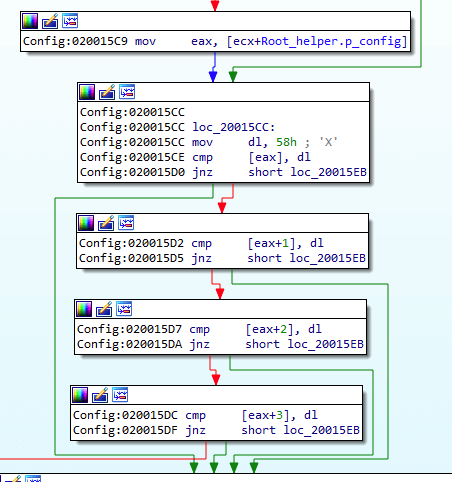 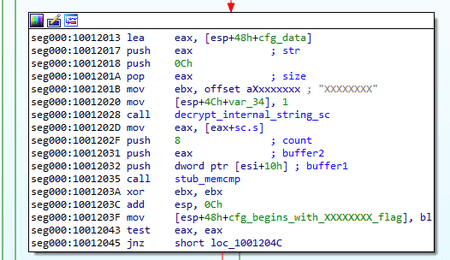 After initializing the configuration, the backdoor checks the value of mode in the shellarg structure passed from the module loader. Actions in accordance with the value of mode are similar to those of BackDoor.ShadowPad.1.

With the mode 5 or mode 6 values, the backdoor searches the list for a module with the code 0x6A (ImpUser) and calls a function from its table. In the BackDoor.ShadowPad.1 the ImpUser module was missing. This module is used for injecting into a process that is created either with the environment of the current session, or by a remotely connected user. In the context of this process, further commands from the C&C server will be processed, which must be received through a pipe from another running instance of the backdoor. Thus, the backdoor running with mode 5 or mode 6 acts as a “server” for the pipe connection, and its second instance relays commands to it from the C&C server. Below is a list of processes that the backdoor attempts to inject a payload into:

Similar functionality exists in the PlugX family of backdoors. For example, in BackDoor.PlugX.38 the named thread DoImpUserProc is responsible for this. 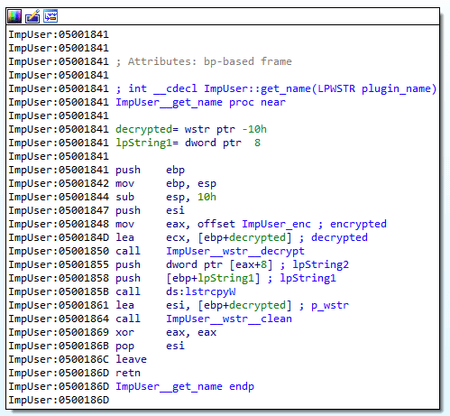 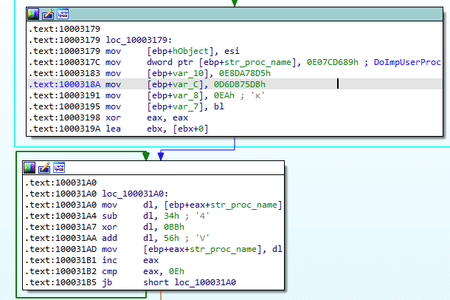 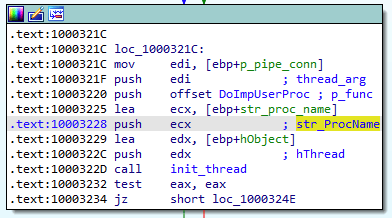 If the values are mode 7 or mode 8, the backdoor attempts to perform a UAC Bypass using the DLL hijack of dpx.dll library, loaded by the wusa.exe process (it has the autoElevate property), and the IFileOperation COM interface. To do this, it extracts its copy — dpx.dll (1d4a2acc73a7c6c83a2625efa8cc04d1f312325c), which attempts to run the original copy of the backdoor with elevated privileges.

The patterns of BackDoor.ShadowPad.3, depending on the value of the shellarg.mode parameter, are similar to the behavior of PlugX. In the shellarg structure of the BackDoor.PlugX.28 there is a op_mode parameter, which determines the work patterns of the malware (installation in the system, injection, function interception, etc.).

BackDoor.ShadowPad.3, similar to BackDoor.ShadowPad.1, can achieve persistence either as a service or by using the autorun key. The service name, its description, display name, and registry parameter name are stored in the configuration. Like the PlugX family, BackDoor.ShadowPad.3 uses mutexes with names that depend on the process ID to synchronize the restarted program process and the parent process.

This backdoor also uses a mutex to prevent restarts. The name for the mutex is generated by a special function of the Config module. 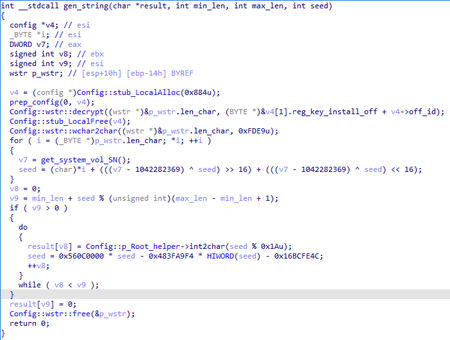 The same function is also used to generate the name of the file that stores the configuration, the directory where screen screenshots are stored, and so on. The result of generation depends on the seed transferred to the function and the serial number of the system volume. A similar approach to generating unique names was used in BackDoor.PlugX.28:

Before connecting to the C&C server, the backdoor uses a function to generate a string with the 0x434944 seed (CID in ASCII). This string is used as a key name and registry parameter to store the ID of the infected computer. The ID itself is an array of 8 random bytes. Thus, the backdoor attempts to save the following structure in the registry at <HKEY>\Software\<CID_generated>\<CID_generated> (it is also possible to save it in the HKLM or HKCU sections):

It should be noted that the previously analyzed PlugX samples also generate a computer ID before starting a dialog with the server and save it in the registry. A certain seed is used for generation.

After creating the ID, the backdoor performs a network scan and starts interacting with the C&C server. Network scanning is necessary to search for other infected systems on the local network. To do this, 4 separate threads are started:

Scanning sends a TCP packet containing the unique identifier of the infected computer. The response is a similar packet. If the IDs do not match, the IP address from which the packet is received becomes the address of the C&C server for the backdoor. For local communication, the port used is the one hardcoded in the configuration in the config.port_to_scan parameter. There are 2 scanning modes available: 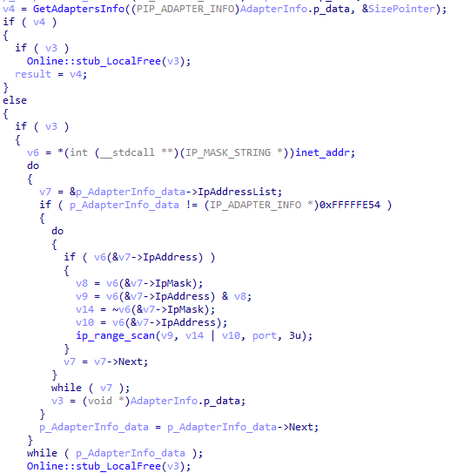 A Network Discover (TCP) firewall rule is created to open the listening port for an incoming connection. 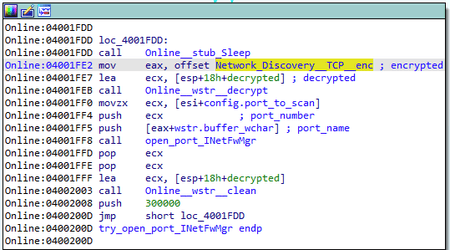 The rule is created using the FirewallAPI functions of the INetFwMgr COM interface. 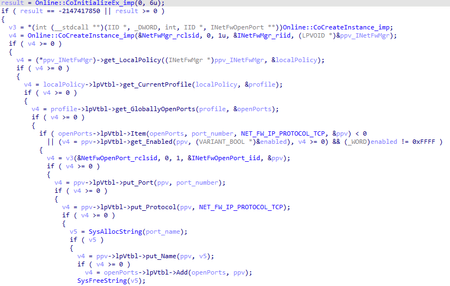 To work in server mode the backdoor opens a port from the configuration and waits for an incoming connection from clients. When a new connection is received, a tunnel is created between the local client and the actual C&C server. Network communication in scanning and tunneling mode is performed using the TCP module. The format and structure of the packet are similar to BackDoor.ShadowPad.1. 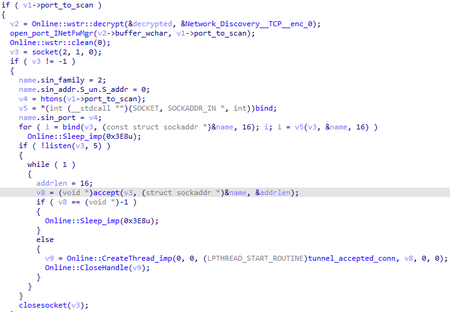 The functionality of the backdoor in server mode in the local network is also present in the PlugX samples. In particular, in BackDoor.PlugX.38 the JoProc named threads are used for this purpose:

After initializing the local tunnel, BackDoor.ShadowPad.3 starts to establish the connection to the C&C server. At the first stage, the backdoor attempts to connect directly to the server specified in the configuration as a string. If the attempt fails, it retrieves the proxy server settings from the configuration and attempts to connect to the server using the proxy.

After a successful connection, it sends a packet with 0 to 31 random bytes written in the body. The response is a command for a plug-in. The commands for Plugins, Config, Install, and Online are identical to the BackDoor.ShadowPad.1 commands with some exceptions:

The name of the module with spelling mistake is contained in the code.

The module contains a single command — 0x1300000. This command creates the command shell cmd.exe with I / O redirection through pipes to the C&C server.

When initializing the KeyLogger module, a hook of the WH_KEYBOARD_LL type is set. Keystrokes with window names are recorded in a log file. The file name and path are generated using the previously specified function.

The Screen module takes a screenshot during initialization and saves it in the directory whose name and path are generated. The screenshot settings and JPEG encoding parameters are contained in the configuration file located in the Log subdirectory of the backdoor home directory.

The module is designed to work with recent files and has one command — 0x13D0000. When the command is received, the backdoor lists all files with the .lnk extension in %USERPROFILE%\AppData\Roaming\Microsoft\Windows\Recent and retrieves information for each of them using the COM interfaces IShellLinkW and IPersistFile. 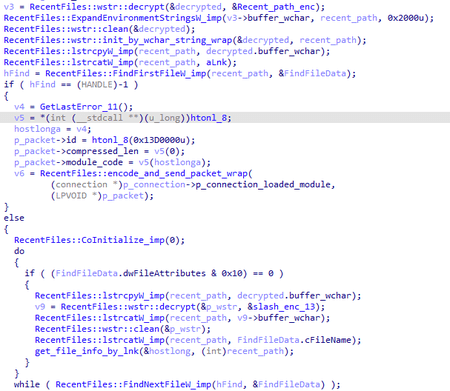 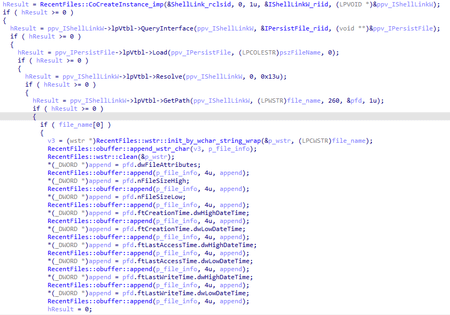 It is also worth noting that ShadowPad and PlugX use identical encryption algorithms: 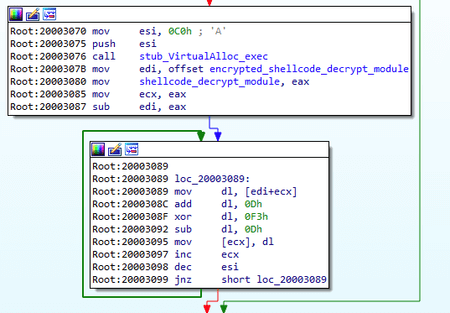 ShadowPad uses this algorithm to encrypt the shellcode, which in turn is used to encrypt plug-ins and packets. 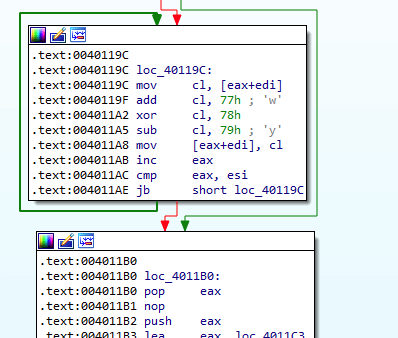 BackDoor.PlugX.26 uses a similar algorithm to decrypt the shellcode from the file.