A Trojan for POS terminals. It is a modification of Trojan.MWZLesson.

The Trojan is distributed as a ZIP archive that contains a SCR file, which is a self-extracting SFX-RAR archive. This file then extracts, runs entroentry.exe, a malicious application, and saves an empty file named indexoid.txt.

Once launched, the Trojan checks the system for its copy and tries to detect one of the following running processes:

The Trojan attempts to find the following modules in its process:

In addition, the Trojan determines whether a debugger or virtual machines are present on the system. If it finds a program that can somehow hinder the Trojan’s operation, Trojan.Kasidet.1 executes the following command in CMD:

And then it terminates and deletes itself from the system.

To start its malicious activity, it is run with administrator privileges executing the following command for wmic.exe:

Even though the User Accounts Control (UAC) system demonstrates a warning on the screen, the victim is put off their guard because the running application (wmic.exe) is allegedly developed by Microsoft: 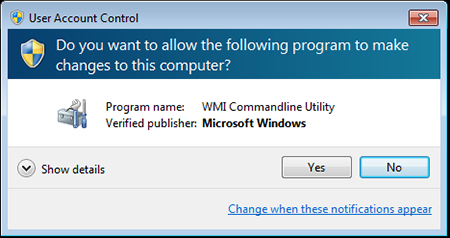 In Microsoft Windows 8, the Trojan disables SmartScreen and modifies the system registry branch:

Then it deletes the following value:

The Trojan modifies the Windows registry to ensure running of its copy.

Unlike Trojan.MWZLesson, C&C server addresses of Trojan.Kasidet.1 are placed in a decentralized domain zone—.bit (Namecoin). It is a system of alternative root DNS servers, which is based on the Bitcoin technology.