An installer of unwanted applications that targets OS X. Once launched, it reads the ".payload” file in the application folder. The installer also contains another "payload” file, but it is not used. The file looks as follows:

In order to get the list of applications for download prompting, the installer creates URL and encrypts it using the key randomly generated. For encryption the AES algorithm is used in СВС mode. Then, the following line is created:

After that, the following request is made:

The node URL from which the applications will be downloaded is created the following way:

The following fields are retrieved from the configuration file:

The following values can be used as a parameter of the “browser” variable:

The rest fields are updated with data that is identified based on the operation system parameters.

The server response is also encrypted with the key included in the installer’s body and contains the programs list which can be downloaded to the user’s Mac. The response has the following main fields:

For every application, three fields that contain JavaScript encrypted with Base64 are determined:

The installation dialog has the Custom Installation mode, which shows check boxes that allow to refuse all the additional software. 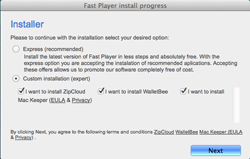