A trojan written in Visual Basic .NET and designed to run on 32-bit and 64-bit versions of Microsoft Windows operating systems. The studied sample was distributed through compromised websites. It is designed to collect system information and transmit it to attackers over FTP protocol. It also downloads a malicious dropper with an MSI package to install Remote Utilities software. Based on our information, we assume that in 2019 the Trojan.GidraNET.1 creator used this trojan to initially infect the system through a phishing email and ultimately upload the backdoor that silently installs Remote Utilities software on the compromised computer.

The main functionality is stored in the readConfig method called from Form1_Load.

At the beginning of operation, it collects the following information about the system:

The trojan saves the gathered information to a file and takes a screenshot. 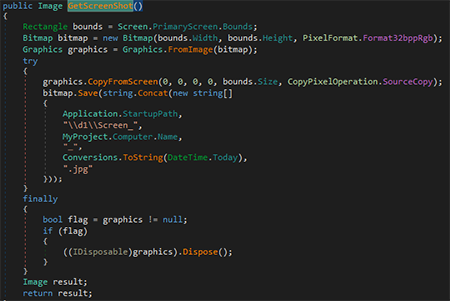 It sends information about the system over FTP to the ateliemilano[.]ru server.

The username and password to access the FTP server are hardcoded in trojans body. A separate directory is created for each infected computer.

After sending the information, the trojan launches the file downloaded from another compromised server.

The files downloaded by similar malicious samples are droppers written in Visual Basic that contain MSI packages to silently install Remote Utilities software such as BackDoor.RMS.187.