A multifunctional backdoor trojan for the 32-bit and 64-bit versions of the Microsoft Windows operating systems. It is one of the components of the Trojan.XPath trojan family. It is used for granting unauthorized access to infected computers and performing various malicious actions upon attackers’ commands.

Trojan.XPath.4 is written in C++ and created using several open source projects. One of them is the Cyclone TCP library designed for low-level operation within the network. Malware creators modified it to use the WinDivert driver instead of the WinPcap driver. The second project is the modified libdsm library, which implements the operation through the SMB protocol.

The trojan reads and decrypts the configuration file from the Video or Scsi parameter stored in the [HKLM\\SOFTWARE\\Microsoft\\LoginInfo] registry key. It then verifies if the first 4 bytes coincide with the 1E 5A CF 24 value and if the 16th bite equals 0xCE.

Next, Trojan.XPath.4 forms a unique HWID (Hardware ID) identifier of the infected device, based on its hardware configuration.

After that, it opens the device \\.\BainduHips to verify the network driver is available. Depending on the operating system version, any calls to the driver are performed in a specific way. The first one is executed in the Windows operating system versions, starting from Windows 2000 and ending with Windows Server 2003 R2 where the WinCap-based driver is used. The second one is executed on newer versions of Windows where the WinDivert-based driver is used.

In order to determine through which network interfaces the trojan should work, it searches for the network interfaces with types MIB_IF_TYPE_ETHERNET and IF_TYPE_IEEE80211, which are connected to the network. If Trojan.XPath.4 is running on a Windows version earlier than Windows Vista, it sends the IOCTL code 0x80000800 to its driver. After this IOCTL code is received, the driver installs its own hooks onto the handlers, which are responsible for various functions of the TCP/IP protocol.

Based on that, the trojan can operate in two modes. In the first mode, it functions as a client (Client Mode), connecting to the C&C server and waiting for the corresponding commands. In the second mode, the trojan operates as an agent (Agent Mode), listening to the specific ports, and waiting for other clients to connect and receive their corresponding commands. In this mode, Trojan.XPath.4 acts as a server.

Operation in the Agent (Server) Mode

While working with the network driver, Trojan.XPath.4 does not actually listen to or receive connections on a port. Instead, the driver listens for traffic on the network interface and sends filtered packets to the trojan. As a result, the port, to which the trojan listens, is not shown as opened anywhere.

Trojan.XPath.4 checks the current day of the week and the time set in the system settings and compares their values with the data from the configuration file. In this file, there is flag for each hour of each day of the week, which inform the trojan if it should run at that specific time. If there is no flag for the current time, the malware will not receive any packets.

Trojan.XPath.4 waits for an incoming packet of 32 bytes. Next, it takes the first 4 bytes as an XOR key to decrypt the remaining 28 bytes. The decryption algorithm is shown in the picture below: 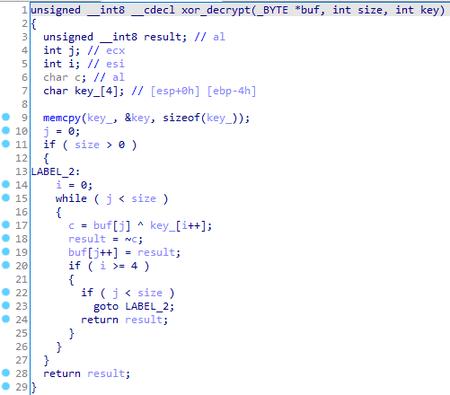 After decryption, it verifies bytes 4 through 12 and does not perform any further actions if these bytes match the string 1I2#aLeb. If this string is not present, the trojan attempts to decrypt the packet with the AES key instead of the XOR key. Next, the trojan verifies if the first 4 decrypted bytes match the string 7r#K. If there is no match, the trojan will determine an error has occurred, and all further packet processing will be stopped. But in case there is a match after decryption, this packet will have the following structure:

If the values of the field mentioned earlier are different from those the trojan expects, it will round off the size of the packed_size field to the larger value, multiple to 16, which represents the size of packet’s payload. After that, it receives the rest of the data, decrypts it with one of two AES keys and unpacks it with the LZMA algorithm. Next, it verifies if the size of the unpacked data matches the size presented in the decomp_size field of the st_packet_header packet. If the site match is confirmed, Trojan.XPath.4 sends the received command into the tunnel or executes it on its own if the tunnel was not created.

Operation in the Client Mode

The trojan generates a random port number within the range of 10000 ≤port_number≤ 65530 and connects to it.

Next, it forms the following packet:

In the port field it specifies the number of the previously generated port. Next, it takes the GetTickCount() value as an XOR key to decrypt the packet, and encrypts this value in its first 4 bytes. The trojan creates the socket, connects to the C&C server listed in the configuration file, sends the packet, and ends the connection. Upon receipt of this packet, the trojan driver will add IP:port from where the packet originates into the firewall exceptions.

Next, Trojan.XPath.4 connects to the same C&C server again, but this time, it uses the socket to which it was earlier connected through the random port. After that, Trojan.XPath.4 sends the packet TOKEN_CLIENT_LOGIN to the C&C server and waits for further commands (additional information about the commands is listed in the corresponding table of the “Commands list” section of this description). Reception and dispatch of the packets is executed in the same way as with the operation as a server (Agent (Server) Mode).

If the packet has any data, that data is packed with the LZMA algorithm. As a result, the following data structure is created:

The resulting data, together with the header, is compressed with the first AES key and sent to the addressee. The only packet not compressed and encrypted with the AES key is the st_hello packet.

The trojan file contains traces of debugging information that reveals the names of the following source code files: