A multifunctional backdoor trojan for 32-bit and 64-bit Microsoft Windows operating systems. It represents an executable library written in C++. It uses vector classes and strings from the STL library (Standard Template Library). The main function of the trojan is to obtain unauthorized access to infected computers and perform malicious actions at attackers’ commands.

The mymain carries the main functionality of the trojan.

When called, this function uses GetTempFileNameW to generate the name of the temporary file with the rar prefix and opens it for writing. This file is used as a journal. Writing to the journal is performed in the following format:

Before it is added to the journal, the written data is encoded with the XOR operation, using the 0x31 byte. The rec_id table of ID values is listed at the end of this description.

Next, the trojan collects the following information about the infected system:

It then checks that the library runs inside the VMWare virtual machine environment. If it detects a virtual machine, the corresponding information is added to the collected system data, while the trojan continues to run.

There is a list of several C&C server addresses encoded inside the source code of the BackDoor.Logtu.1. They are encrypted with the XOR, using the 0x11 byte. However, only the first address from that list is used to control the backdoor. See this list below:

Moreover, the trojan stores an array of ports within which each element corresponds to one of the servers above:

BackDoor.Logtu.1 has an option to use a proxy server, but the analyzed sample lacks such an address. If the proxy server address is present, it is also encoded byte by byte with the XOR operation, using the 0x11 byte.

After the initial preparation, the trojan launches the cycle of connections to the C&C server through the TCP socket. Within the first connection, BackDoor.Logtu.1 tries to directly connect to the server. If it fails, it uses an HTTP proxy server if its address is encoded into the body of the trojan. If it wasn’t successful, the trojan extracts the proxy server parameters from the HKCU\Software\Microsoft\Windows\CurrentVersion\Internet Settings\ProxyServer registry key and tries to establish the connection. . In case of another failure, the backdoor tries to obtain the proxy server information through the WinHTTP API, sending the google[.]com request via the WinHttpGetProxyForUrl function. If this attempt has also failed, BackDoor.Logtu.1 tries to extract the corresponding settings from the HKU\<session_user_SID>\...\ProxyServer registry key. . This cycle repeats until the trojan is successfully connected to the server.

After successfully connecting, BackDoor.Logtu.1 sends the information about the infected system to the server. The data transfer and response receipt is divided into two stages:

The data transferred from the trojan to the server, as well as its response, are encrypted with the RC4 algorithm. The encryption key is stored inside the trojan body as a separate string, but calculates using the following algorithm:

The ID of the packet with the system information has a value of 0. 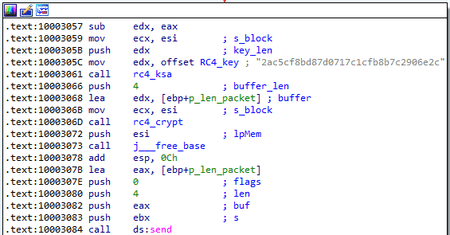 After the system information is sent and the trojan receives the response from the server, it launches a thread that sends heartbeats every minute. Their ID has a value of 1 and the payload length has a value of 0. After 10 packets are sent, the server connection closes and reestablishes again.

In some cases, the command contains additional parameters presented in the form of the strings split with the | symbol. The structure of this command has the form of the "param_0"|"param_1"|...|"param_n".

The list of commands that the trojan can receive and execute is shown in the table below:

Writing to the journal (logging): 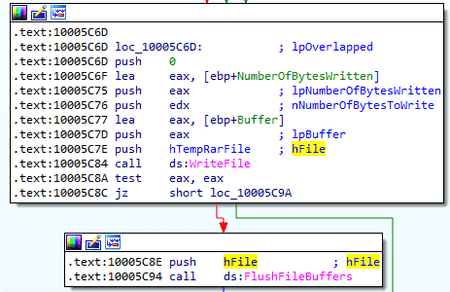 Table of the identifiers of the log entries types