A malicious program for Android mobile devices. It may be distributed under the guise of various applications. This bot can perform multiple actions upon receiving a command from cybercriminals. The main aim of this Trojan is stealing money from bank accounts of Russian users. 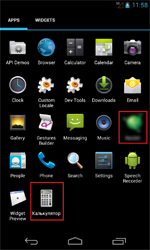 When launched, Android.BankBot.33.origin tries to gain access to administrator privileges of the mobile device showing the appropriate system prompt until the victim gives consent. Then, depending on modification, the malware displays a message about the allegedly occurred error or displays the application interface that the Trojan used to get onto the mobile device. After this, the bot deletes its shortcut from the home screen.

Then the Trojan connects to the command and control server (C&C server) located at http://xxxx.xx.214.97/task.php and loads the following information about the infected device:

In return the bot receives a list of the following commands transferred to it in JSON format:

The Trojan sends SMS to the customer service numbers of several Russian banks as well as to one of the most popular payment services in order to obtain information about the user's bank account and bank cards. When the necessary information is obtained, Android.BankBot.33.origin transfers all available funds by means of special SMS commands to the cybercriminals' account.